How did the horses of The Household Cavalry respond to the equine puppets of theatrical sensation War Horse? 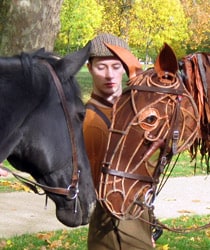 With War Horse due to feature in a spectacular showdown in the much-anticipated Finale performance at the Olympia International Horse Show, the life-sized equine puppets and the real horses of The Household Cavalry met face to face for the first time.

Ahead of their performances at Olympia (14-20 December, 2010), Joey – the leading equine puppet from West End hit War Horse – met Troopers and horses from The Household Cavalry on a crisp autumn morning on Tuesday, 3 November in London’s Hyde Park.

Among the living and breathing equines was Spartacus, the Cavalry’s long-distinguished Drum Horse who is also retiring at this year’s Olympia after 20 years of service.
Click here to watch Horse&Rider’s exclusive video of Joey and Spartacus

Puppet Joey – who happens to be just as life-like as the real thing – went on to meet Elizabeth, one of the Household Cavalry’s Musical Ride horses.
Click here to watch Horse&Rider’s exclusive video of Joey and Elizabeth

One of the Troopers then took the reins and mounted up on Joey – for a slightly different horse riding experience!
Click here to watch Horse&Rider’s exclusive video of a Cavalry Trooper riding Joey

From stage to stables

War Horse actor Perri Snowden, who plays Capt Nicholls from the play, went on to ‘inspect’ some of the Troopers in Hyde Park.
Click here to watch Horse&Rider’s exclusive video of the Troops Inspection

War Horse‘s Joey and The Musical Ride of The Household Cavalry can both be seen performing at Olympia, The London International Horse Show from 14-20 December 2010.

For more information visit www.olympiahorseshow.co.uk or call the Box Office on 0871 230 5574

Have you read the Olympia feature in December Horse&Rider?